This was written by Judy Wong, one of my students in Tianshui Normal University in Gansu Province. The assignment was to talk with an old person when home on break for the Mid Autumn festival, and get an old story. This is what she wrote and it’s great. This is the story with formatting and punctuation as she wrote it.

Blind Man and the Sun
by Judy Wong


May be my story is too short. But I think it all meet my foreign teacher’s requirements. Because this is an old Chinese story. In fact it is much a parable. So after I telling this story, we can think about its implied meaning.

Once upon a time there was a blind man who does not know what the sun is. So he asks other people to explain.

Once a man said “the sun is shaped like a copper plate.’ So the blind man banged on a copper plate, and      listening to its clanging sound and remembering it.   Later when he heard the temple bell, he thought that must be a sun.

As we all know the sun is vastly different from a bell or a flute but a blind man doesn’t understood the differences, because he was never seen the sun and only heard it been described.

Now my story is over. Let’s think about its deep implied meaning. I have heard it for a long time. But maybe I’m so stupid. So until now I still can’t understand it. And maybe this is the characteristics of Chinese ancient story. 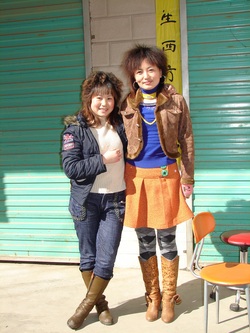 
China is old. When my ancestors were painting themselves blue and running down rabbits in the mountains of Scotland and England, China was already a place of walled cities, and scholar princes. It was also a land with too many people in too many villages, too close together. The solution to this was to create a world where everyone has a place and a role. Five hundred years before the birth of Christ, Confucius did that for China.

In the Confucian world the family is the patriarchal heart of society. The father is the moral example and it is the role of family members to learn from the father and model their behavior on his. This model is then extended to all levels of society with the Emperor at the top. To teach Western concepts such as honor, or individualism is difficult, because honor is seen differently than in the West, and individualism is discouraged at all levels of society.

At the heart of traditional Chinese society is the family. A young man is expected to work and study so as to raise the social and economic status of his family and then care for his parents in their old age. A young woman is expected to enter into a marriage that will do the same. It has worked for thousands of years, but with the opening of China it is changing. The Chinese family is broken. In the cities divorce is common. Twenty years ago divorce was rare and shameful, but not any more. A week ago I had lunch with three Chinese women in their forties, all were divorced and living with their teen aged sons. In the countryside is different. In the countryside families are economically broken. There are many villages where you will find few men and women over sixteen and under fifty. They have gone to the cities as migrant workers. The children are left with grandparents who in most cases must also care for the farm. This is a ticking bomb. The Chinese government is attempting to address this issue, but like all other Chinese problems the first thing that must be seen is numbers. China is facing three great problems: the gap between rich and poor, the birthrate that makes that problem (and all others) worse, and the increasing cultural gap between the young Chinese of the Southern Cities, and the rest of China. Many of these young people have lost much of traditional China and they have tried to replace it with a mix of foreign movies and wishful thinking about themselves and their world. This can be seen most easily in the fashion of the street. I had a young man come to class wearing a jacket with the anarchist circled A symbol, mixed with swastikas. When I asked him about the anarchist symbol he answered: “it is Western.” When I asked about the swastika, he responded: “It is good luck.” (The swastika is a Buddhist symbol.) When it comes to women’s fashion there is a Chinese saying: “The whores look like college girls and the college girls look like whores.” Much of popular fashion looks like something that might have been designed by a Gypsy transvestite for his younger brother’s sweet sixteen party. While the fashion sense of Chinese young people is hardly a world threatening issue, it does reflect some deeper problems. These young people have lost much of their own culture and are replacing it with a Hollywood version of America and this certainly raises the issue of problems in much more important areas of life. I have now been in China for six years. I have many Chinese friends. I fear what the future will bring in a more and more interdependent world. I have never feared the future, and at 72 I probably shouldn't be worrying about long term world problems, but I do worry. It is unlikely that I will live to see what happens, but many people I love will, (unless, as an old black preacher in a nursing home once said ) "The Uppertaker comes before the undertaker."  All I can do now is to pray ..... "Come Lord Jesus....... and if You have other plans for the near future, send your Spirit to give us strength to serve a world in pain and chaos.